Finally the day had arrived. On June 8 we flew from the International Airport in Johannesburg to Maun, Botswana. When we arrived we were met by our Capture Africa representative and pilot Chris who appeared to be the Doogie Howser of the pilot industry. Teresa was concerned enough that she had to ask his age. We never did get a straight answer but when she guessed approximately 22 he said “that’s about right”. We were convinced he was about 17 years of age. He was a very capable and friendly fellow. Just before we were to clear customs Richard went through his bags and discovered that his video camera was missing. Apparently this is a very common practice on Air Botswana. The baggage handlers simply go through bags and take what they feel they need. There was a warning sign stating not to keep valuables in your checked in bags. We should have heeded this advice. Richard lodged a complaint with the local Air Botswana representative but this was to no avail. Live and learn. This is why you should strongly consider having your checked in bags shrink-wrapped which is a service they provide for 5 dollars US at the airport. Teresa and I had nothing stolen.

Aerial view of the Okavango Delta with airstrip in background 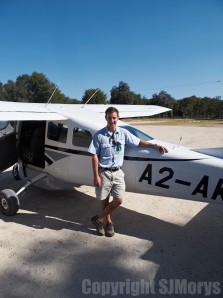 After clearing customs, we boarded our small plane operated by Mack Air and had a pleasant flight of approximately 40 minutes to Moremi Game Reserve within the Okavango Delta. We had a nice aerial view of the area we were going to spend the next four days in. We landed on a rough airstrip and were met by our first naturalist guide Brian Gibson who operates his own company called Capture Africa. With his wife, Hildrene, they have grown their small mobile operation since 1997. Brian is responsible for leading the tours and the actual camp operations while his wife is an extremely capable operations manager and brilliant chef who teaches the camp chef to make absolutely outstanding meals. Their website is http://www.capture.africa.com. If you are coming to Botswana please consider Brian and Capture Africa. Generally you have to work through an agent usually based in the United States and we used The Africa Adventure Company. Their website is http://www.AfricanAdventure.com.

Once the greetings were concluded we hopped into the Toyota Land Cruiser (the 4 x4 of choice) and ventured off into the wilds. It took us approximately 2 1/2 hours to actually get to our first mobile camp. The number of animals that we saw on this drive was absolutely outstanding. They included lions, cheetahs, wildebeest, elephants, impala, kudu, baboon, giraffe, hornbill and numerous birds I will never remember. This was going to be good. In my next post I will describe what safari mobile tenting is all about.