I am completely behind on my blog. Such is the life of a wild adventurer. It has been difficult with the lack of Internet or e-mail connection in Botswana. Therefore, I have decided to give a simple overview of each major section of our travels.

Evelyn and I spent July 7-10 in London, England. My previous blog post describes what we did up to the end of July 7. The next several days were a collection of museum visits, walking tours through the city, bicycle rides through the Royal Parks, evening theater and late evenings soaking up the warm British temperatures. Thankfully, the royal birth did not occur while we were there. The crowds were already enormous around Buckingham Palace.

Evelyn and I attended an absolutely wonderful retrospective of L.S. Lowry’s work at the Tate Museum, Britain.

It was a fascinating look at this influential British artist. He was enthralled with the industrialization of Britain as well as the interaction between the masses and the billowing smoke-stacks of progress. It was so easy to lose oneself in the museum and before you knew it half a day had slipped away. It was wonderful to not feel pressured and to spend as much time as one wanted in order to understand the artist one was viewing. I wish I made more time for this back home. It always seems there are too many other tasks that are deemed necessary that pull me away from museums in my own hometown. I think this is a shame. It is something I am going to have to rectify when I return home.

Two days later we also attended a presentation on Pompeii and Herculaneum at the British Museum. Everyone is familiar with the eruption of Vesuvius and the devastating effects on these two local communities. The preservation of the fossils was remarkable. It was very emotional to see the casts of human victims constructed from voids in what must’ve been a horrible end. Also fascinating was how similar their lives were to the present lives we lead. Sometimes it seems like we believe we have come up with every major idea and technological advancement in this century. This is certainly not the case! When you visit museum presentations like this one you begin to realize how every culture builds on those that preceded it.

Most evenings were taken up with London theater performances. We attended The Hot House by Harold Pinter and also The Cripple of Inishmaan starring Daniel Radcliffe. Even though it had a very dark premise, we felt the acting was superior in the Harold Pinter play. It was amazing to witness the talent of these actors. Evelyn and I had to chuckle over the studio theater that that Harold Pinter play was presented in. We were actually seated on small temporary chairs right on the stage and were within spitting distance [literally] of the actors. The temperature on the stage lived up to the name of the play. We both left the play enlightened but dehydrated. 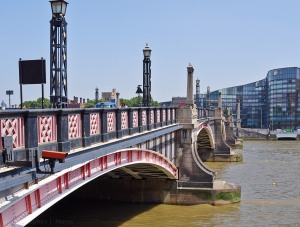 Another highlight of our trip was riding rented bikes through the Royal Parks. Bike hires are available throughout the downtown section of London. It encourages tourists and locals to make use of bicycles in order to get around. This makes so much sense. Of course there is so much congestion and traffic it is by far the most practical way to see London. The only roadblock we had were the massive crowds surrounding Buckingham Palace. Of course we were there during the changing of the guard which did not help. 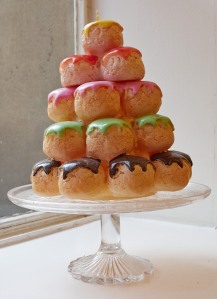 The food was fantastic in London. We had easy access to a wonderful French bakery very close to our hotel which was centrally located making all excursions extremely easy. We had so many fantastic places to visit simply by walking to them or by taking “the Tube”.Our time in London flew by.

Before we knew it, it was time to go to the airport on July 10 where we met up with our fellow travellers Teresa, Lorraine and Ron at the airport. They would be joining us for the Botswana portion of our adventure. It was great to see them at the airport and I could sense the enthusiasm in all of us for the upcoming safari. Teresa and I had been there before and we knew the quality of our guide and the safari company we were going with. We could hardly wait to get on board. We had a long overnight flight from London to Johannesburg. Botswana beckoned.

Hello again. Evelyn and I did actually get some sleep, with pharmacologic intervention, on the overnight flight to London England. We must’ve had a tailwind as we arrived approximately 40 minutes early at Terminal 5.

Our big decision was to either take the subway express or a taxi to our hotel. I convinced Evelyn that a taxi was the way to go. Little did we know that there was going to be a slowdown on the highway into London. On the positive side, the weather was absolutely spectacular. Completely blue skies and very hot. A quick check on the iPhone told us that this weather would likely last for the remainder of our London leg with highs of 27-28°C. Perfect. The trip to our hotel took a lot longer and we would have spent a lot less money if we had taken the subway express. Alas, we comforted ourselves with the fact that we had door-to-door service.

Our hotel was located right in the centre of London beside the “Eye”. A perfect location. One thing we were not prepared for were the massive crowds! Mind you, this was peak summer season in one of the largest cities in the world. What did we expect?

We were quite desperate to purchase theatre tickets for the following 3 days. After dropping off our luggage, we quickly hired another taxi to get to the discount ticket centre in Leicester Square. After 10 minutes it became clear that we would have been better off walking. We were completely bogged down in traffic. We simply paid the taxi driver and walked the remainder of the way. On Sundays, the ticket centre closes early at 4:30 PM. We arrived at about 4:15 PM and found out that it was unlikely to get into any performances that evening of our choice. We quickly decided on a standup comedy performance called ” Stand Up for Women” which was a benefit performance for numerous women’s support agencies in London.

At this point, we decided to part ways as Evelyn was meeting a friend, Anne, and I was itching for a run to shake off some cobwebs from the previous two days of preparation. We decided we would simply meet in the theatre district later that evening at 7 PM. The plan was for each of us to eat dinner prior to the evening’s performance.

I returned to the hotel to quickly change and started my run hoping to only go for about 50 minutes. It was brutally hot as well as very humid. It didn’t seem to matter. I ran back up through the theatre district into Hyde Park and was hoping to simply run down the Royal Parks back towards Westminster. Somehow, I got turned around and ran much too far east. I started to panic a little bit because I knew I was going to be late for that evening’s performance at 7 PM. I got back to the hotel at approximately 6:35 PM sweating and about 5 lbs lighter. That was the quickest shower I’ve ever had. My running clothes were strewn about the hotel room as I endeavoured to get changed. I still had about 25 minutes of walking to get to the Garrick theatre.

I did arrive late by about 10 minutes. I could not find Evelyn so I sat in an end aisle seat and enjoyed the performance immensely. I was able to meet up with Evelyn at intermission. All of the performers were local comedians. I think we missed half of the jokes as they were based on local politicians but it didn’t matter. It was a great and easy way to end the evening. After the performance we had a wonderful Italian meal as I was famished and then made our way back to our hotel where we collapsed into our beds for a very well-deserved slumber.

We certainly squeezed a lot into our inaugural half day. Tomorrow we would be visiting the Tate Britain museum. How cultured!

It is hard to believe that two years have passed since my last big adventure. It has been a very stressful time filled with challenges and much sadness. This trip represents a time to reflect, recover and to immerse myself in the wonders of Africa again.

My great friend Evelyn will be joining me as we plan to live large and squeeze in as much adventure and culture as we can.

We leave at about 9:30 PM MST tonight from Calgary for an overnight flight to London, England. We pray, with pharmacologic help, to get a good night’s sleep in coach (is this possible?) so we arrive refreshed and ready to experience what this great world city has to offer.

Stay tuned for what we have planned in London.