Le Pont de Montvert to Florac: Sixth day of the hike. This is going to be the big day! A 28 km hike with an injured right foot. Will I make it? The previous night my French friends came up with a plan to shorten the hike to approximately 12 or 13 km. They apparently had a car close by and one of the hikers was going to transport the vehicle to the exit location. They wanted to do this because of the very long distance and the expected high temperature of 37°C in Florac. They invited me to join them starting at 6:30 AM. I really did think hard and long about joining them. However, despite my injured foot, I was committed to completing the Stevenson trail completely and on my own steam.

In order to accomplish this I would have to start hiking by 6 AM. It was pretty much straight up from Le Pont de Montvert until you reached a nice high plateau and had a pleasant walk amongst “rocks and brooms”. The sun had not yet risen and the temperature was relatively cool at 22°C. Even though there was some pain in my right foot I pushed on. I was rewarded with a nice descent through some lovely foliage but then there was another much more sustained ascent to get up to Signal du Bouges. There were panoramic views all around. There was also an interesting set of cairns which apparently was a favourite meeting place for the Camisards, called Les Trois Fayards, from where they marched on Pont de Montevert in 1702 to ignite the Camisard War. The Signal du Bouges is the highest point of the Massif Bouges which runs parallel to Mont Lozere. Last century, the intensive exploitation of the area by local families led to the immense deforestation and the dwindling of native wild animals. Rural exodus rebalanced things and led, at the end of the 19th century, to a natural and artificial reforestation. Thus, the northern slopes of the massif are practically covered with forest nowadays.

I enjoyed walking this stretch because it was a ridge [I love ridge walks] with panoramic views. From this point, it was going to be a downhill descent of 880 m. The trail was quite similar to our alpine trails and was quite rocky and I had to be quite careful with my injured right foot to not fall or twist it.

For your information, Stevenson did not walk the same route as I did today. He headed out west from Le Pont de Montvert, along a path that is long since tarmaced as the D998, and camped out on a ledge above the Tarn. He slept badly and was later accosted by a beggar woman whom he paid off as if it were for his night’s lodgings. He then meant an old Protestant man from La Florac and opined, “ if the Garden of Eden be anywhere, it is here in the Valley of the Tarn as it goes down to Florac”.

At about the 19 km mark you arrive at a junction where you have three options to get down to Florac. Because I am a sucker for punishment, I took the longest route [which is the new GR 70] which apparently is not the route that Stevenson took [which is now the GR 68]. There was a long and steady descent that challenged the knees through the Cevennes National Park. I eventually exited the park through Bedoues and then had a shaded path to climb and then finally descend into Florac. Yeah!!! I did it. Even my right foot felt okay.

Florac is a town with a population of approximately 2000 people. It is located at the junction of three natural regions: Mount Lozere, the Cevennes and the Les Grands Causses. It is the home to the headquarters of the Cevennes National Park since 1970: it also gave birth to Le Club Cevenol, an organization of eminent locals dedicated to preserving the local heritage and environment. It was that organizations interest in Stevenson’s trek, around the centenary of his trip, that led to the finding of his “Cevennes Journal” in the United States and the launch of the GR 70 as it is known today. What a fitting way to end this part of my blog of the Robert Louis Stevenson trek. It has been most satisfying from an exertion point of view, it allowed me to experience the wonderful French countryside and the hospitality and generosity of the local French people. I feel privileged to walk along the same trails as them as well as Robert Louis Stevenson previously. I plan to take it easy in Florac today except for a nice walk around town. Tomorrow, I have to make my way back to Bormes. I have no reserved bus ticket or train tickets but will hope for the best utilizing my broken and inadequate French. There is always an adventure waiting to be experienced. 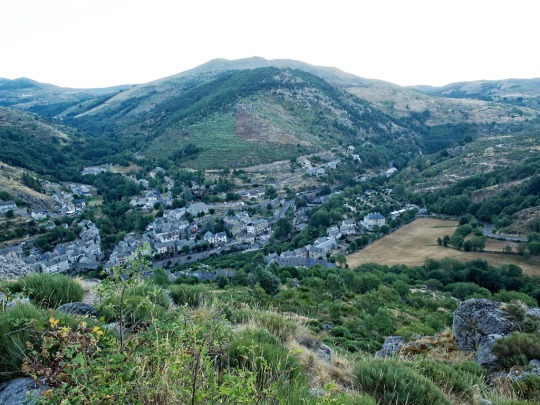 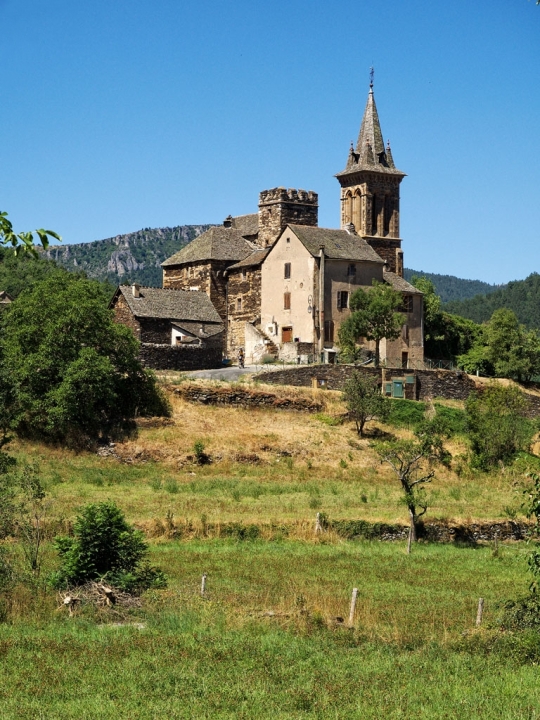 Yet another beautiful church, Bedoues 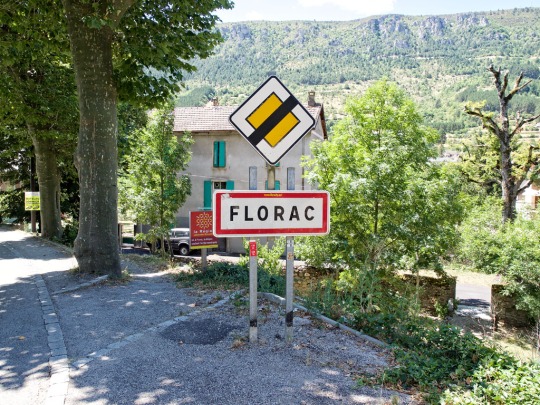 Yes! I did it. Here is the entrance to Florac.