Tuesday June 5 2018. I awoke in my very comfortable bed in Lopez Village, Edenwild Inn. I joined Tinus and Louise for a rather meagre but well done breakfast. We cycled independently along Lopez Avenue smelling the vegetation and wild rose along the road. Very pleasant! It was overcast but no rain. I was going to miss Lopez Island for its pastoral quietness and it’s many road names like Vista, Namaste and Paradise. Orcas Island was going to be harder to cycle and had harsh names like Massacre Bay, Victim Island and Skull Island!

I arrived at the ferry terminal after about 30 minutes of cycling. I was early and was soon joined by Louise and Tinus. Conversation ensued to pass the time.

The ferry for inter-island travel was smaller and the crossings were quicker. We had a brief stop on Shaw Island and then onto Orcas. We departed and I took off on ahead. The riding was hilly compared to Lopez but still very pleasant. I visited Deer Harbor and had a latte and a breakfast wrap. Both very good and much cheaper compared to the going rate on the San Juan Islands.

I peddled back to another intersection with Crow Valley Road and proceeded north. What a fantastic road. Undulating, rural but lined with blooming wild rose; it’s sweet liquor filling the air. I was really looking forward to stopping at a local winery on the same road but unfortunately it was closed- only open weekends presently. I stopped and had a good cry and peddled on.

Eastsound arrived soon. My stop for the night. I quickly checked in (thankfully the room was ready) and dropped off 2 panniers for the big climb ahead. I was staying at the Outlook Inn. Very charming. 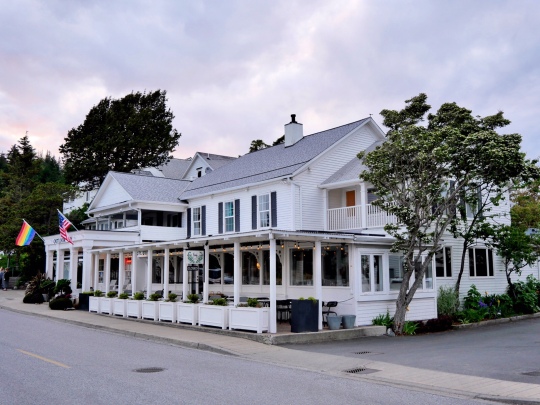 The ride up to Moran State Park was steady and pleasant. Moran is the “crown jewel” of the San Juan Island Parks. I can see why. It’s spectacular.

Mount Constitution is a mountain on Orcas Island, the highest point in the San Juan Islands and the second highest mountain on an ocean island in the contiguous 48 states. A stone observation tower patterned after a medieval watch tower stands at the summit. It was designed by architect Ellsworth Story and built by the Civilian Conservation Corps in 1936. The tower offers panoramic views of the surrounding islands, the Cascade Mountains, and many Canadian and American cities. On a clear day, the view encompasses locations as diverse as Mount Baker, Mount Rainier, Saturna Island, and the cities of Vancouver, and Victoria British Columbia. Mount Constitution lies within the 5,000 acre (20.2 km2) Moran State Park. The ride up was long and tough. Great views about three-quarters up helped with the arduous task.

The summit was eventually achieved at 2407 feet with about 4265 accumulative elevation gain! The views from the top were spectacular and white-capped Mount Baker was clearly seen. The stone observation tower was impressive. What an overview! 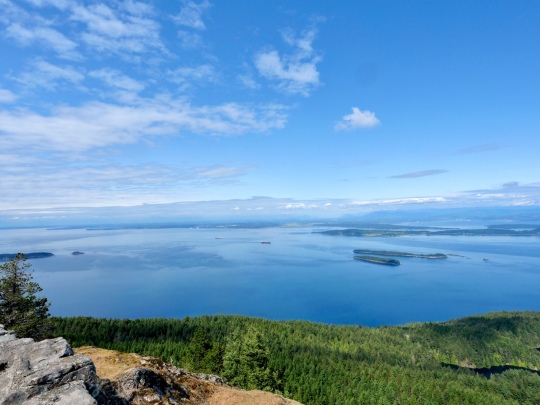 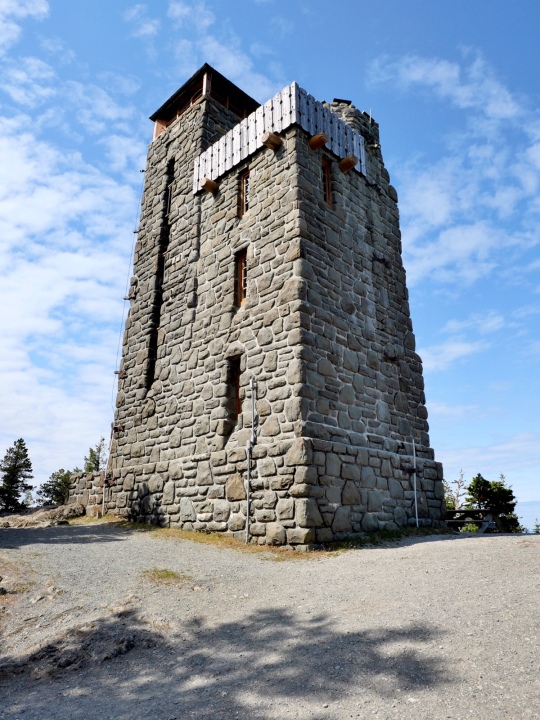 I spent about 30 minutes up top taking photos and having a snack. I then proceeded down at “warp speed”. On my way down I saw Tinus and Louise making their way up. They had the same look on their faces that I had earlier. What a thrill going up to 60 km/hour on steep descents and taking corners like a Ferrari! My hands were sore from braking so hard when I got to the bottom. It was a fast ride back to Eastsound. I had a coupon for a local craft brewer, Island Hopping Brewery, so I figured it was a great way to celebrate my huge climb today. I had the beer flight sampler which was made up of seven, yes seven, small glasses of their local brew types adding up to about 2 pints in volume. Great beer and price with the coupon; however, I did feel rather loopy at the end. I cycled back to town (I am pretty sure it was a straight line) and took off to the “Lower Tavern” for a meal. It was needed to soak up all of the beer consumed recently. The tavern provided very hardy pub food in a fun bar-like atmosphere. I did an evening walk around the village and retired to blog and slowly sink into a well deserved deep slumber. Onwards to San Juan Island tomorrow.

San Juan Island Tour- Anacortes to Lopez Island with a visit to the world’s most welcoming outhouse and South African stalkers!