Sunday June 10 2018. I am going to warn you right off the top- do not expect many photos from today. All will become abundantly clear.

I awoke not feeling the best. I slept well but felt I was lacking energy. I had a very slow morning and only had a light breakfast thinking I could get some food “on the road”. I got out by 9:45 AM which was late for me. The distance was long again today. It was not presently raining but the forecast was not looking promising.

I had a rather uneventful 9 mile (so American) to Joyce WA. It had the best general store which had been open for over 120 years. It was amazing to walk through and see hundreds of general store items for sale. I picked up a milk and apple for the road. I had to get a photo of the store with “Eric the touring bike proudly resting on the side. 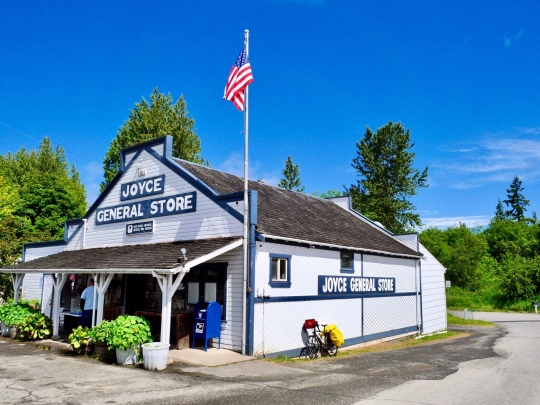 The lady owner inside recommended a cafe just further up the highway famous for its blackberry concoctions. Strangely, it was called the Blackberry Cafe!

I had a great breakfast there and man was it busy for a small place. A good sign. They had a menu item called the “Sasquatch Burger” and at a price of $32.95 US I bet you can guess how much beef came with that meal. More likely a ticket to the ICU! I did NOT

have that burger. I was thrilled with a very generous omelette and whole wheat toast. I was so full I could not have the famous Blackberry Pie they are famous for. Another time. 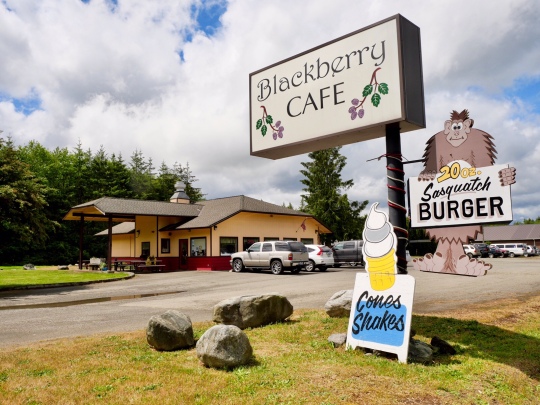 So far the morning was going amazingly well. All good things must come to an end. The weather became “erratic” after I left Joyce. There was rain and then sun followed by rain repeat 10 times! This is most frustrating on a bike. I do have gear to keep dry so when the rain came I had to get off the bike and put all of the pannier rain covers on as well as my personal rain gear including helmet rain cap (yes, there is such a thing). I would ride but then the sun would break through for long enough that you started to sweat. You had no choice but to stop to take off the personal rain gear otherwise you would get wet with sweat. Repeating this time and time again really frustrated me and slowed me down considerably. Rain if your going to rain!! It’s easier that way.

Also the route along Highway 112 seemed pleasant at the start, it was hard slogging with steep ascents and chilling descents. My legs really got a workout. On one of the steeper ascents (9% grade) I thought to myself man this feels hard. Harder than it should. I am relatively fit and my touring bike has 30 gears (yes it helps to have that many when you are carrying a load). There was also an odd slapping sound coming from the front of the bike. I stopped on the steepest section of the road only to discover my front tire was flat. Arghhh! I was way behind because of all the costume changes and now this! I had a moment and then composed myself. Just get on with the task. At this point I can here all of you saying “why do you put yourself through this? Just rent a car next time”. Well, no matter what you do in life unexpected events occur. I have found in my life that challenges (while challenging) often lead to great rewards and a sense of accomplishment. Life has not been easy but I have been privileged to experience some amazing things in my life. Also, one has to keep things in perspective. At the time the flat occurred I was not on a steep descent, it was the front tire (always easier to repair) and the sun had came out. I got down to work and had the flat fixed quickly and was on my way.

I was happy to be on my way but as soon as I was the deluge of rain really started! I was really being tested today. Happy thoughts, think happy thoughts.

I proceeded to come off Highway 112 (now my own personal Highway of Tears) and turned onto Highway 113. I was greeted with a massive 4 mile climb. What sustained me was the thought that I would reach that blessed campground at Bogachiel State Park before the town of Forks. This was how I had interpreted the map the night before. After the big ascent I rode and rode expecting the campground to come up quickly. Wrong. I figured it out when I saw the city limits sign for Forks WA. 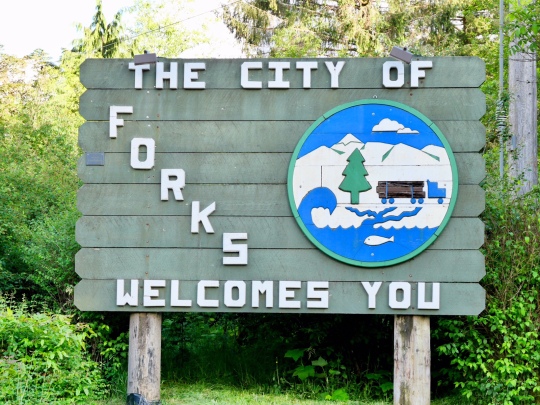 I was now traveling the circuit CCW and not CW so I actually had 6.5 miles to go. Oh what fun! These challenges come up time and time again when you cycle tour. They build character. I have LOTS of character. The rain had settled (an appeasement from the gods I am sure).

I finally arrived at Bogachiel State Park very fatigued. It was much later than I hoped as I pulled in at 8 PM. I called my family as two brothers were having birthdays soon. It was nice to hear their voices after much solitude. I had a freeze dried meal that was dreadful even though it is one of the better brands. 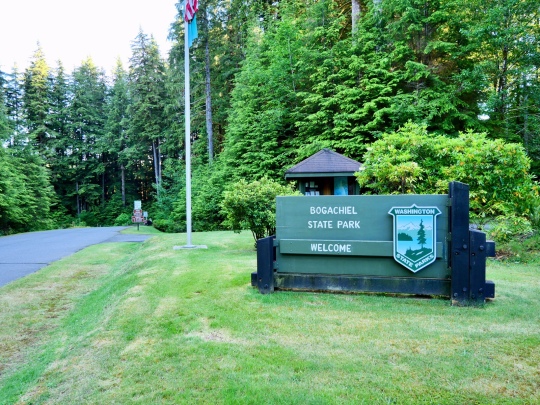 I decided the best way to end this epic day was to go down to the Bogachiel River a quick walk down from my lovely campsite. As usual the beauty of nature had a way to calm me before I fell into a well deserved sleep. Would these epic trials continue?