A Day of Rest in Anacortes!

Saturday June 16 2018. I slept in. Finally! I had no where to quickly pack up and get to. This next week was going to be about relaxation. I must admit I was having second thoughts about not cycling up to the Northern Cascades, but, quickly brushed these misgivings aside. I know I made the right decision. I had a leisurely breakfast to use up the last of my food supplies and packed up.

Washington City Park has a lovely scenic loop ride and I decided I would cycle this before I rode back into Anacortes. It was sunny and the earlier forecast of sunny and warmer seemed to be coming true. As I cycled I passed a walker who noted my fully loaded touring bike and said “you’re brave to cycle this way. I said it seems pleasant. She stated yes, but, I know what’s coming ominously”. The grade did get steeper and steeper but was doable. I got up to a lovely viewpoint for some photos and then a nice downhill. 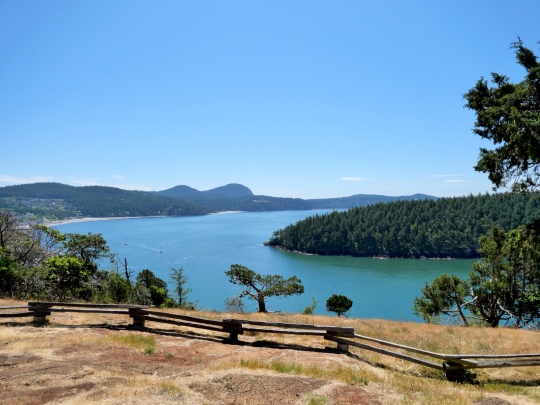 Soon I was in Anacortes at noon and stopped in at my hotel. I thought I would drop off my panniers and bike and then enjoy Anacortes on foot as check in was not until 4 PM. My room was ready! Great!

I took my gear up and got organized and had a nice, long hot shower. I took a light day pack and camera and headed off.

I stopped in at the Visitor Centre to get some ideas. Another tall ship was in Port and the Farmer’s Market was on but only until 2 PM. It was already 1:45 PM. I quickly went over to the Farmer’s Market but they were already packing up. From what I could briefly see they had some nice offerings. I noted a barber shop across the street and thought I would stop in for a hot shave. He told me with recent changes in regulations it was not worth the price to do these so they were not offered. I decided to just chat with the fellow. The barber had cut hair in Anacortes for over 22 years and had a very unique shop with great decor. So different from modern stylists. When I had arrived he was cutting a local woman’s hair and you could just tell he knew each customer personally. As I was leaving I noticed a great Harley-Davidson trike out front. It was the barber’s and he told me with bride how he himself customized it and got it for a steal from a local woman who had the bike roll over on her and she was left with significant injuries so her husband insisted it be sold. The barber told me he enjoyed taking his grandchildren on the motorbike and traveling to visit his children. I had not noticed as he was sitting that he had lost both feet to diabetes and this afforded him mobility and freedom. I had to snap a photo of the bike and owner.

Next, it was on for a latte. Cycling in I had noted a nice “espresso hut” and decided to go there. It was a bit of a walk. It was busy! I ordered the latte but when it came time to pay she said it was on the house. How nice! I hope it wasn’t because I was still in a feral state and she thought I would benefit with a little charity. I really needed to shave! My beard is salt and pepper and does make me look older.

I stopped at Safeway to get a disposable shaver and small shaving foam canister. I also picked up another micro cleaning cloth. I never could find the one I had earlier misplaced.

I next decided to just check out the Cap Sante Marina boardwalk in town. It was warm and sunny. I learned that this marina area had originally been marshland and had been developed when the town was established. Over the years with paper mills and other mills the area had become quite polluted. A major redevelopment was undertaken to make it into one of the greenest marinas and tourist destinations for boaters and visitors alike. It was a beautiful marina. A lot to see including that tall ship, all of the yachts and great dockside restaurants. I realized I was quite famished and stopped by Cabana’s Restaurant and, in the words of the server, to “destroy” a Mahi-Mahi fish taco! 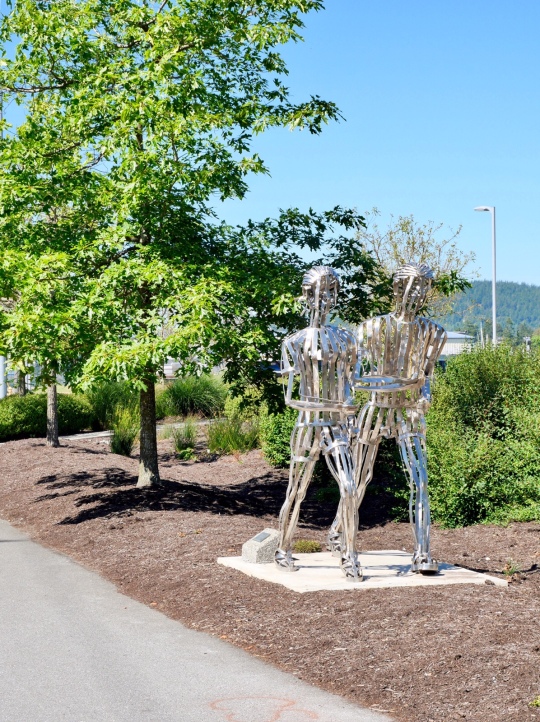 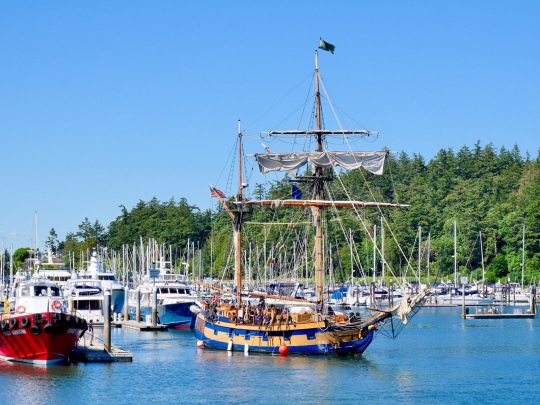 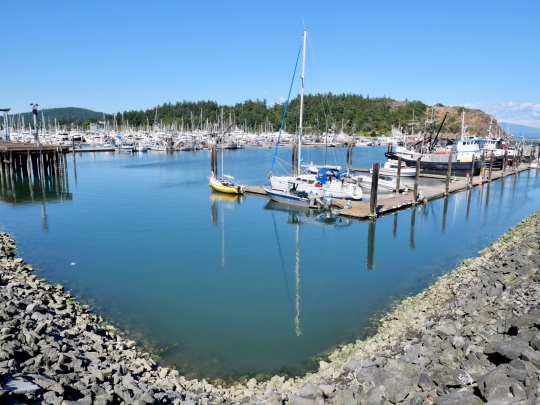 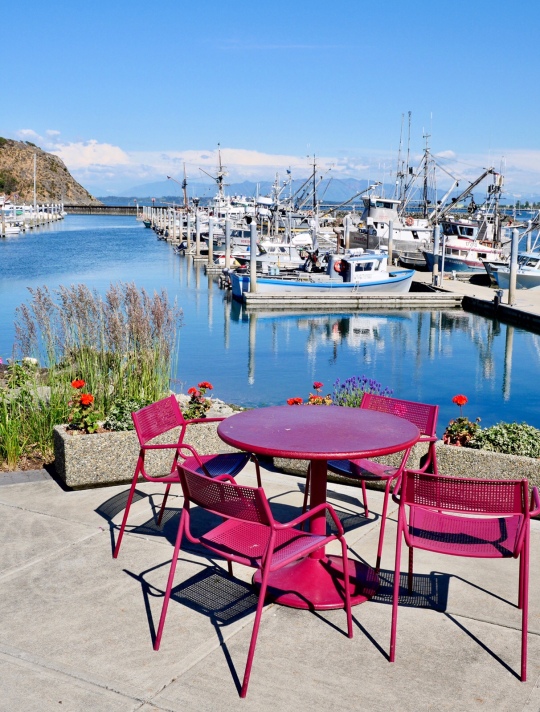 I decided to walk towards the Cap Sante Lookout and along the way stopped at an ice cream stand for dessert. Yum!

The views from the Lookout were fantastic! Several photos were taken. 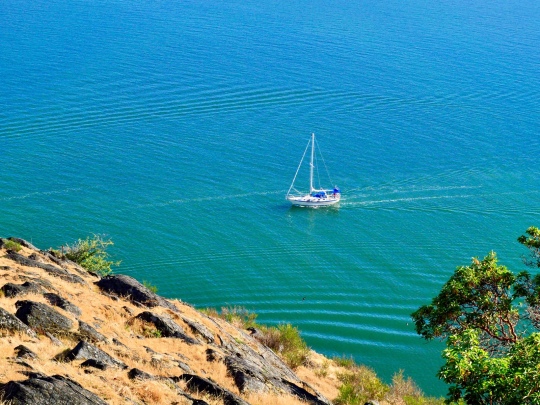 I returned to town and found a lovely wine and nibbles tasting shop and had a great cheese plate and 2 glasses of local wine- a Pinot Gris and Riesling, both lovely. Now this was the life!

Afterwards, I enjoyed a walk along Commercial Avenue looking for more murals. My hotel had a rooftop bar so I stopped in for a G&T and watched the sunset from my vantage point. 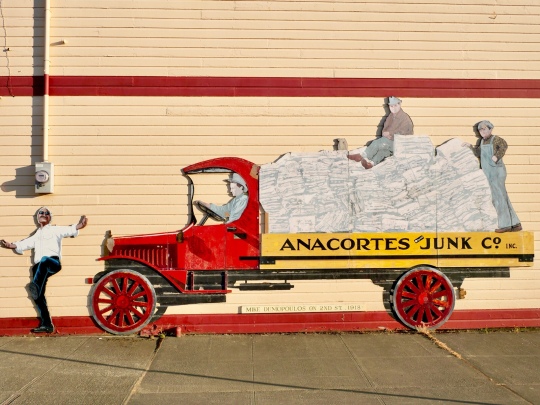 A fantastic day! I returned to my room and slept in a real bed after days of camping. My body said thank you.

Port Hadlock to Anacortes….back to the start!