I awoke earlier today than Anna and decided to head out for a walk. No particular destination. It was a lovely morning and I had slept well so I was full of energy. It had been a rather slothful previous 2 days so activity was warranted.

What’s my name (an homage to Deadpool)- it’s Colm Farrell!

I decided to find Phoenix Park as our cabbie had mentioned how large and beautiful it was. There was also a Bloom Festival going on in the park that weekend. I proceeded to walk down a side road from our hotel and quickly found Heuston Train Station 1.15 km from our hotel (thank you GPS watch!). Fantastic! This would be our departure point from Dublin today to Galway. It was well within walking distance.

I quickly saw the Bloom Festival signs and followed them until I reached the entrance to the park. Phoenix Park (Irish: Páirc an Fhionnuisce) is an urban park lying 2–4 km west of the city centre, north of the River Liffey. Its 11 km perimeter wall encloses 707 hectares (1,750 acres); it is one of the largest enclosed recreational spaces within any European capital city. It includes large areas of grassland and tree-lined avenues, and since the 17th century has been home to a herd of wild fallow deer. The English name comes from the Irish fionn uisce meaning “clear water“. The Irish Government is lobbying UNESCO to have the park designated as a world heritage site. In 2018 it was named the Best International Urban Park.

During my walk I saw many waterfowl including a pair of swan with 6 newborn goslings, said fallow deer and numerous joggers and walkers. The Park was huge! The walk took longer than expected, but, I eventually returned to the hotel to a slightly worried Anna.

We had a nice breakfast at the hotel and a very reasonable check out time of noon. We walked through the Irish Museum of Modern Art grounds to get to the Hueston Train Station. The parklands were being prepared for the Forbidden Fruit Festival. We got to the train station early and walked around but we were almost run over by two strapping lads pushing some heavy stocking carts. At the same time our eyes fell on the word Prosecco on one of the boxes and we of course followed them to a local shop. Said Prosecco was on sale (a great deal) and 2 bottles found their way into my luggage (of course I paid for them). We then celebrated our find with two half pints of Bulmer cider at the Galway Hooker (a hooker is a type of traditional Irish boat and not what you were thinking) because Anna saw some men drinking said libation and liked the colour, a tangerine orange. It was delicious.

Our train was boarding soon so we headed off to the listed platform 7 only to find out 10 minutes prior to departure that the train was on Platform 5. We made it! We were off to Galway.

I named this blog posting green and grey because that explains Ireland’s scenery and weather. Beautiful, lush green landscapes with grey, overcast and often rainy weather. We observed this as the train transported us the two and a half hours from Dublin to Galway. It gave me time to catch up on the blog and download some photos. A pleasant journey augmented with a bag of onion and cheese crisps. Anna loves saying that word!

We arrived in Galway and got to our hotel on the edge of Eyre Square within 4 minutes. Just before we arrived at the hotel I turned to Anna and stated how remarkably smoothly all was going when my heavy rolling duffel bag abruptly slipped out of hand and fell on my right foot! As the Irish say- don’t be too proud!

The Victoria hotel is currently being renovated and thankfully, as it is a bank holiday weekend, there were to be no workers banging away during our stay. It is a very quaint, boutique hotel perfect for our purposes.

We enjoyed a bottle of our stash of Prosecco and then hit the town spying out the shopping district and looking for a restaurant.

There were so many Italian restaurants! I am not sure why? The city itself is lively and full of stag and stagette destination groups who like to party. This was a new phenomenon to me but luckily Anna explained it to me.

Galway is known for its Gladdagh rings and Isle of Aran sweaters and we were on the hunt! We found a great sweater shop and planned to return to shop prior to departing. We also found a nice Italian restaurant for a meal. We visited the Latin Quarter and the Dock Road and then decided to finish the night with a gin and tonic at the Hotel Meyrick. I went to the bar to order the local Galway gin with elderflower tonic water and when I turned I was shocked to see my chair occupied by an Irishman chatting up Anna! I had to remain Colm (get it!) as I approached our table. The fellow, named Colm, was attending one of his friend’s stag party in town and decided to take a break from all of the partying and come to a quieter bar! He openly admitted he was drunk but was happy to talk to a pair of Canadians. We had a wide ranging, somewhat disjointed but very entertaining conversation before we saw an opportunity to diplomatically leave his company as he insisted he buy us a drink. We left him in the good hands of a woman at the bar! 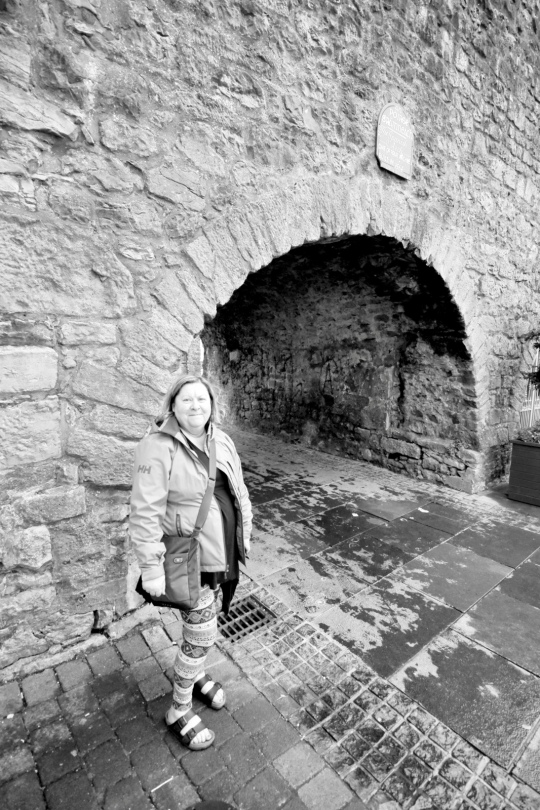 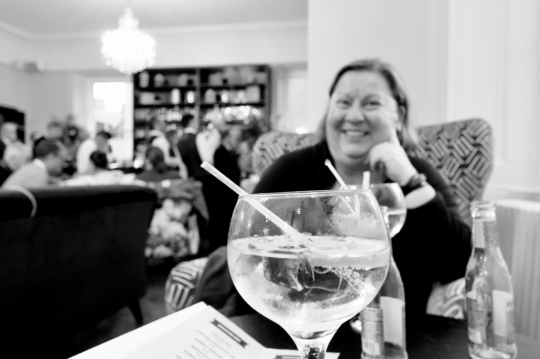 We made our way back to our hotel with Anna’s keen sense of direction and retired for the night. We were looking forward to our tour of the Burren and the Cliffs of Moher tomorrow. The departure point was directly across from our hotel at a funky Hostel voted the best in Ireland. It had some cool murals in it’s stairway. 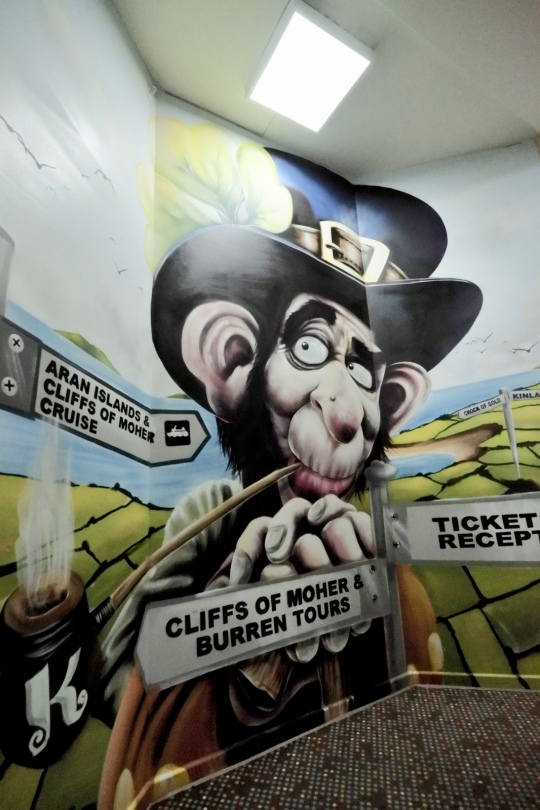 Cliffs of Moher and the Burren