A quick shower helped and then we had a nice breakfast at the hotel and took our bags down to street level where we were greeted by Patrick, our guide support/driver. He was very pleasant and punctual. We started off 5 minutes before our appointed time. It was raining quite steadily in Limerick though as we drove out from the city.

Patrick was an ex-policeman working for Lifecycle Adventures for just a year. They had just started tours here last year. He kept us entertained and informed unto we reached Camp our start off point. We met our “bike guy” there and after about 30 minutes we were ready to ride! It was still raining. Anna loved her e-bike right away dispensing with some of her trepidation about this tour. The ride started very easily which was great for Anna. We did find a good place for Anna to pray for good luck on the upcoming tour! 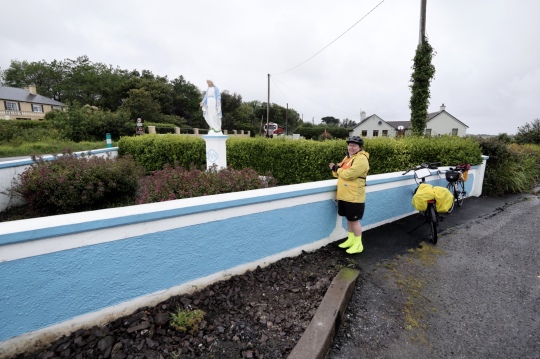 She looked strong and comfortable. As we rode the rain got heavier but our lunch spot soon appeared Tomasins Bar. 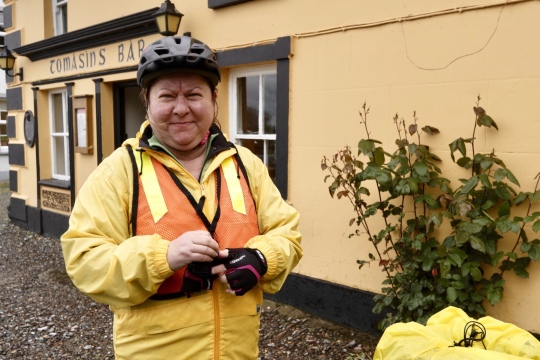 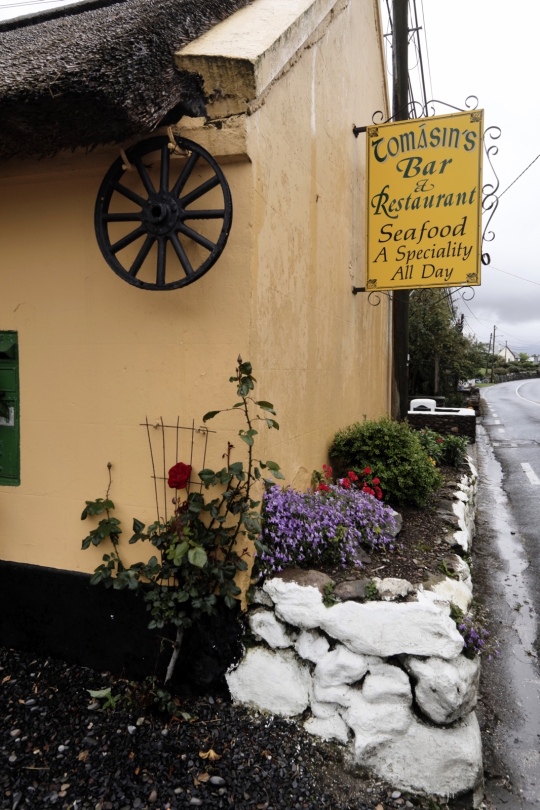 We had a really great lunch meal here with hot and hearty soups and a filling main course. Now, back on the bikes! After about 5 km my route detoured from the main route. I was heading off to Brandon Point to get an extra 20 km in while Anna would proceed directly up the Connor Pass to get to Dingle before me.

As soon as I turned off the main ride I knew I was somewhere special. The road became a rolling lane with stove bridges and pastoral surrounding farmland. Gorgeous. I passed a lovely church and then had a steady climb to Brandon Point. It was windy but I had the expanse of the Atlantic Ocean before me. I stayed for a little bit entertained by sheep dogs herding sheep. The newborn lambs were very cute. 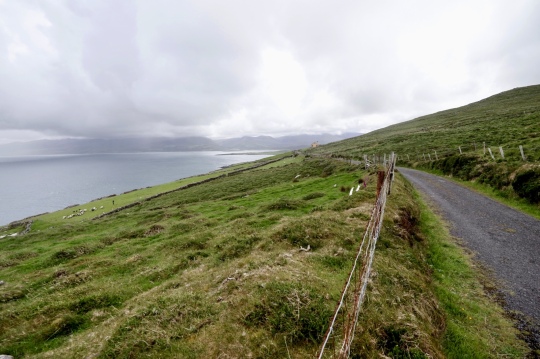 It was a nice ride back down to the main road and then time for the main event- Connor Pass! A steep climb 7.7% grade for 5 km. I took several layers off for the climb. Thankfully there was not too much traffic on this single track pass road. The crest of the Pass soon appeared! Success! The views were spectacular. It looked dark and foreboding though.

The next part was fun. A 10% downhill for 7 km straight into Dingle. The stinging rain drops and constant braking took some energy. One did not want to fall here.

Dingle was like a jewel in the distance and soon I was in the heart of this lovely, tourist town at the Visitor Centre. The GPS track ended here, but, I then remembered I had not written down the name of our B&B! Thankfully, I had a Dropbox file named Ireland 2019 on my phone with the name of our accommodation- the Greenmount Inn. I used Google Maps which got me there in no time.

Anna has already arrived and seemed to be enjoying a long, hot shower. She eventually emerged from the bathroom and I asked her how things went? She said fine…..but, with one little incident. What incident I asked? Apparently at the start of the climb to Connor Pass she didn’t quite get the gearing down on the e-bike quite right and then couldn’t get her foot out of the basket in time before she fell onto the ground in the lane of traffic! She had difficulty getting up but a nice woman stopped and asked her if she needed help. At that point she she was able to get up somewhat scraped and cut on her right lower leg. To her credit she soldiered on and got to Dingle. Initially concerned, my thoughts turned to admiration for her fortitude. Good on her.

Our B&B was beautiful and even had an honour Bar! Gary the owner was very nice and a bit of a joker. When Anna asked him for the WiFi password, he started to recite a complex Gaelic but after several unintelligible consonants developed a devilish grin and laughed. Anna thought he was serious. 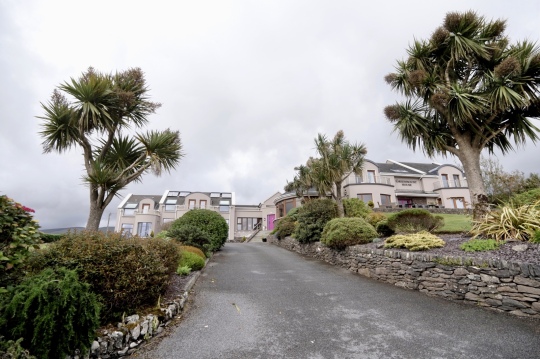 We went into Dingle for some great seafood at the Fish Box and then crossed the street to tour the spectacular St. Mary’s Sacred Heart Church. We had dessert at Murphy’s Ice Cream Bar (produced from the local Kerry cow- a rare, indigenous breed) and then walked back to our B&B to enjoy a glass of red wine looking through panoramic windows on Dingle Bay as the sun set. 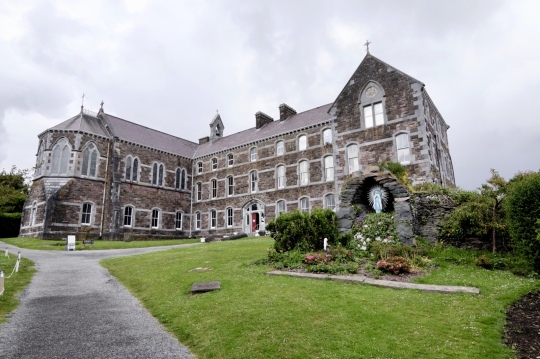 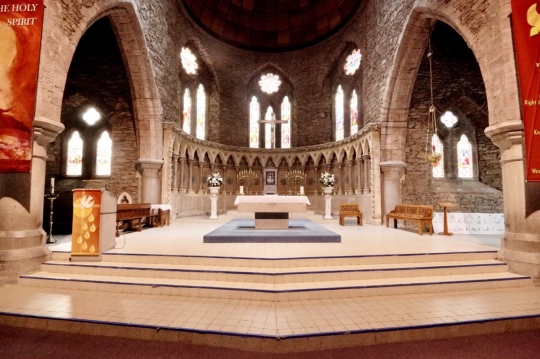 Needless to say we were delighted by Dingle! The Dingle Loop was tomorrow and is one of the most spectacular cycle roads in the world! We could hardly wait as we drifted off to sleep. 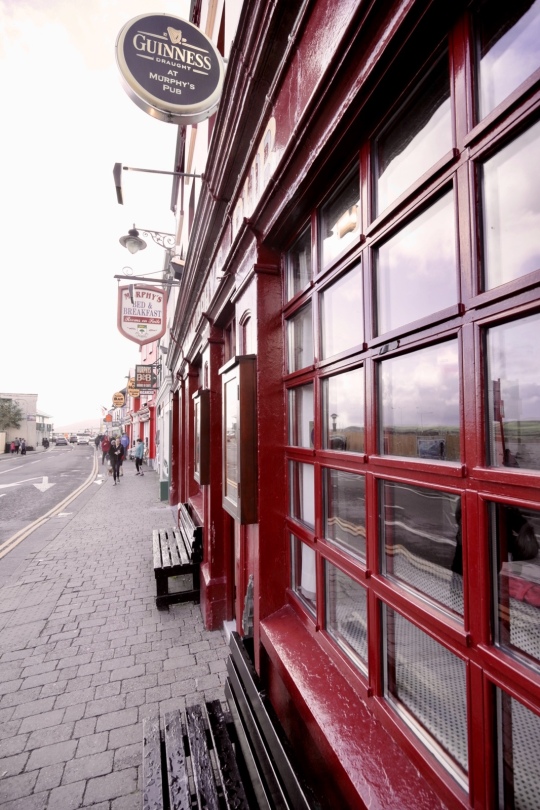 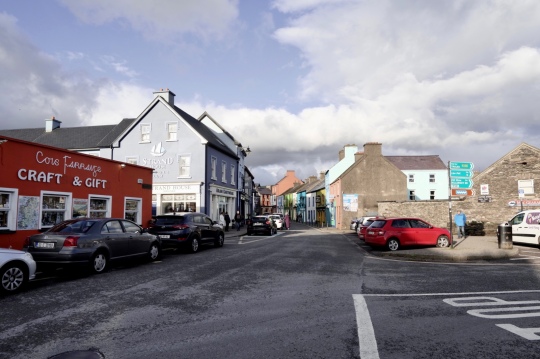 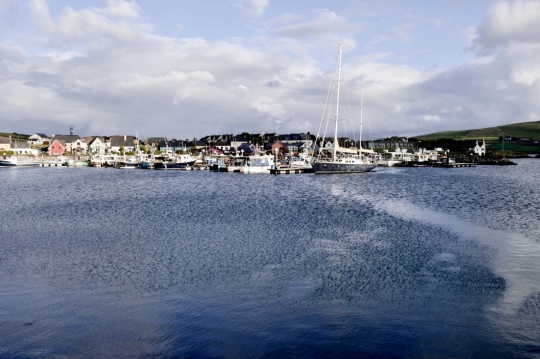