Most of our time in Mana Pools was actually spent in canoes. This was a fantastic way to experience the Zambezi River. The one animal that has done extremely well in this area is the hippopotamus. I must admit I really had little knowledge of this animal. Boy, were we going to get an education. There were hippopotami everywhere. I mean everywhere. According to Nick there were approximately 5000 hippopotami in this area. I think we saw all of them. Most people think of hippopotami as ugly looking and they are often portrayed as comical animals. Nothing could be further from the truth if they are angry. Mothers are extremely protective of their calves. This was a time that we were required to paddle furiously to assist our guides. We had no problem with this. We were educated that they are actually extremely anxious animals and often are very reactive based on fear. We had a fascinating study each day on how not to elicit this behaviour by our guides. They were extremely adept at observing their behaviour as we approached them and the trick was to read their behaviour and always give them space or access to deep water in which case they preferred to avoid you. In the water hippopotami only keep their eyes and the top portion of their head visible. Then they suddenly disappear and this is when you need to worry. They can stay underwater for between 10 to 20 minutes at a time. With the glare on the surface of the water they are completely invisible when submerged. Most incidents occur when they suddenly breach. If this occurs beneath your canoe you will be overturned. Most of the fatalities occur because unbeknownst to us most Africans do not know how to swim. They usually drown after being overturned. On rare occasions you can get a predatory hippopotamus which purposely overturns your canoe. This is a frightening experience. Hippopotami have huge teeth and are quite capable of simply snapping through the fibreglass canoes. 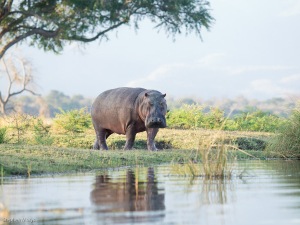 On one of our particular canoe outings we were gently paddling through the Zambezi. It had been a hot afternoon and we were all quite relaxed. Richard and Danni were in the last canoe. We had just passed a particular pod of hippopotami. We later found out that Richard and Dani had just been talking about how uneventful our paddling experiences had been up to that point and how lucky we had been (Richard had been in Africa on this exact adventure approximately a year ago when he had witnessed a hippopotamus attack on a canoe in front of him. It had made quite an impression on him). Little did he realize he was about to have a similar experience. I remember suddenly hearing a yell followed by a huge splash. As I looked behind I saw their canoe overturned with Dani calling out to Richard who was separated from the canoe but amazingly was holding his very expensive camera above his head and paddling with one hand crazily to get back to the canoe. They apparently had been overturned by a very angry and predatory bull hippopotamus who was known to be prone to this type of behaviour. Dani, our most inexperienced guide, did a superb job of handling the situation. The back right-side portion of her canoe had been damaged and bitten through by the hippopotamus. However, she and Richard emerged unscathed. We were even able to joke about it afterwards. Nick was most impressed that in this situation Richard was able to keep his camera from getting submerged at all. It was in perfect working order. Unbelievable. Nick shook Richard’s hand. Richard seemed to be upset that we did not capture this experience by video. We almost beat him senseless. Certainly capturing the experience was the last thing on our minds. It is hard to suppress an overwhelming urge to dive in and swim towards the capsized canoe. This is definitely not the thing to do. Nick instructed us to paddle our canoes and create a protective wall around the overturned canoe and individuals until we were able to right the canoe and get them back in. We paddled to a close sandy island and called back to the main camp to get a new canoe as this one was damaged and would not be able to continue with us on our adventure. I must admit we had to think a little about whether we wanted to continue. After reflection we decided it was best that we should. Unbeknownst to us Dani’s parents- who had come up for several days to spend time with her- had been actually following in a vehicle along the shoreline. They witnessed the whole thing. Later Dani told us that her parents were somewhat concerned with her choice of occupation from a safety point of view. I am not sure this experience helped in that regard. We continued on our way and I am happy to report that we had no further such experiences for the remainder of our time.

I still recall the paddle on our final day. One always becomes sentimental on the final day of any journey. This day was particularly warm and after paddling for a couple hours in the morning suddenly all three canoes were stopped. We were in a beautiful sandy and reedy area with no hippopotami in sight. We were suddenly informed that it was time to go for a swim. I was all for it. I was feeling a little overheated at that point. Suddenly Nick produced a small soccer ball and informed us that we would be playing “Pig”. The purpose of the game is to pass the ball along as quickly as you can to other members who are standing in a circle. If you dropped the ball or threw it poorly you were awarded one of the consonants of the word pig. After three misses or poor throws you spelled the word “Pig” had to bend over exposing your backside and then the other players got to throw the ball at your backside. If they missed they joined you. After all members had thrown you started all over. What a great game. We played like little children for about 45 minutes. A great time was had by all. We then got back into our canoes and paddled back to our final campsite. We simply drifted for the last kilometre to fully enjoy our final paddling adventure. The light was beautiful as the sun was setting on the Zambezi. There was no wind and the water was like glass. We were all in heaven. What a great way to finish off our Mana Pools safari. I think we will all remember that final kilometre forever.

June 21 the next morning we said our goodbyes to the camp staff, Danni, Tanya, the children, Nick and Desi. We were transferred to a nearby dirt airstrip for our Wilderness Air scheduled charter flight back to Victoria Falls Airport. The African Safari adventure of our travels was over. We then boarded a charter flight back to Johannesburg. At this point we said our goodbyes to Teresa and Richard. Teresa was heading back to Calgary with two overnight flights. We gave her our condolences. Richard was proceeding back to England to spend some time with his parents before heading back to Calgary. It was hard to say goodbye after all of our wonderful experiences. Anna and I were proceeding onwards to spend 10 days in Cape Town. 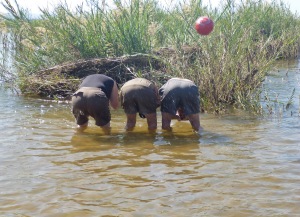 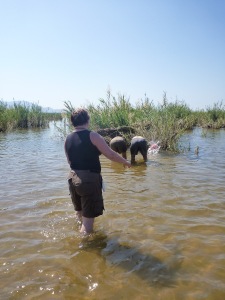