Here it is Day 2, January 13 2015 of my alpine touring adventure. I was feeling a little stiff this morning- mainly the quadriceps- after my rather enthusiastic day of resort skiing at Lake Louise yesterday. I certainly don’t remember feeling this stiff as well as all of this aching in my younger years! Ah….the ravages of time.

Our destination today was Balu Pass. It is a popular area and a great introduction to the Rogers Pass backcountry skiing experience. It involves mostly skinning but there are several nice descents on the way down. Mark chose the perfect place to get me acquainted with my new equipment as well as to assess my capabilities. It was an awe-inspiring journey cradled between Mount Cheops on the left and Ursus Major and Ursus Minor on the right. Mark also pointed out the exact spot where the Strathcona school tragedy happened. Very sad and sobering! Our avalanche risk today was quite low. The temperature was nice and there was little wind. It was a great climb. I thought I had forgotten my camera as I could not find it at trailhead when we departed. I had to rely on Mark to take a few cell phone shots to document our day. I had a cell phone as well but when I took it out it was out of charge. The gods of photography were against me today. 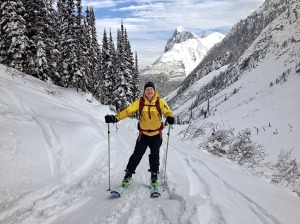 As we approached the top of the pass, the sun shone strongly and lit up snow covered trees and surface hoar on pristine snow which twinkled like diamonds. Mark was ahead leading and I just had to stop and watch as he broke trail through this magical snowfield approaching the crest of the ridge as the sun shone as a brilliant orb in front of us. I had to “just breathe”- as the Alberta Tourism ad says- and soak it all in. Breathtaking! 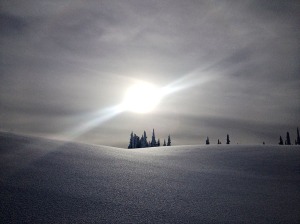 After a quick bite and transition (like triathlon, just with ski bindings/boots), it was time to head down. Mark chose a nice line and went first. He waited at the bottom of the first pitch for me. I am not sure why backcountry skiing is different to me psychologically compared to resort skiing but it is. The mind can play tricks on you. To my surprise I did fine. What a feeling floating through snow surrounded by all of this beauty. More….”just breathing”. Mark had great pointers to improve my ski technique but there was no drama on the way down.

The descent itself is a very long ski out on the slick up track that transforms into a Hot Wheels track on the down track. Taking it slow and cautious is the key. We got out earlier than expected. Our total elevation gain was 802 m and total distance travelled was 11.1 km. Not bad! I had aching quadriceps and cramping thigh adductors as well as a hot spot on my right heel. All in all only minor issues! Mark was a fantastic guide. I learned a lot in terms of what to do in an avalanche, practicing beacon search skills, equipment tips/tricks and especially skiing technique. A great guy and so knowledgeable. His experience comes through in aptly demonstrated confidence and reasoned counsel. This was exactly what I was looking for in hiring a guide. 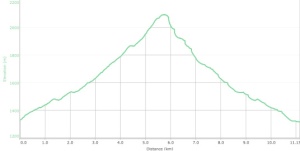 We drove back to Golden and upon our return I promptly found my camera on the “other” bottom of my pack (ohhhh! as Homer would say). We had a great dinner at a local restaurant. Then it was back to the motel for a soak in the hot tub. Simply put, I am finding the hot tub a necessity, not just a passing fancy….I may have to get one for that new backyard of mine! Stuff always leads to more stuff.

Tomorrow’s adventure is a surprise as Mark has not yet decided where we will be going in Rogers Pass. Like Christmas Day, I will have to wait for my present in anxious anticipation. You will have to stay tuned. I know, it’s like one of those cliffhanger episodes on TV. Okay, now I am being a little dramatic. Time to sign off. Until next time.